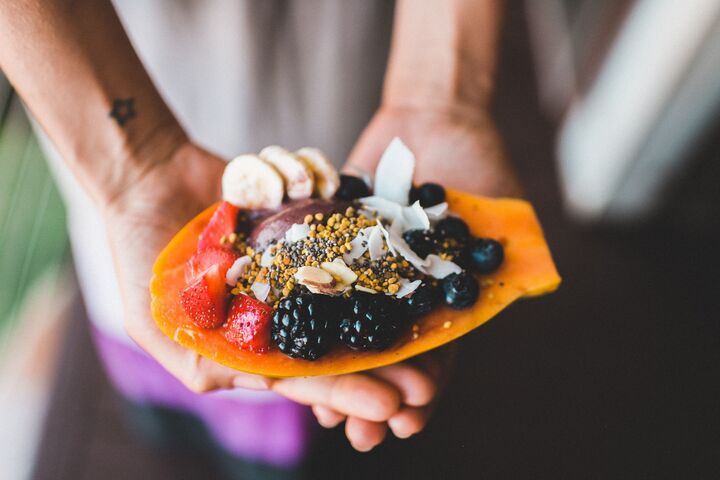 I've always wondered what a yogi diet consists of traditionally, and what other yogi's diets consist of.

I think the part about in-season fruits and vegetables is really important, from an environmental perspective. I have been trying to be mindful about where my foods are coming from and their environmental impact, such as soy, nuts, palm oil, etc.   Living in California it's pretty easy to buy local fruits and vegetables that are in season. Here in Sweden, however,  I haven't really been able to go to any Farmer's Markets. Do they even exist?

It feels like if Swedes only eat locally, we would only live on potatoes.

Personally, I consider my diet as pretty healthy. My diet is based on plant foods, whole grains, etc, with minimal sweets and processed foods. I like to drink a lot of water, and not drink much of anything else, except for a cup of coffee and the occasional smoothie.  I don't like restricting myself, and I don't pay close attention to how much or what exactly I am eating. I think balance is really important, and I think controlling your diet strictly is dangerous. Unless, its due to health reasons.

For example, I have chronic migraine. I have to avoid as much as possible my trigger foods which would induce migraines, such as alcohol, sugar, caffeine, and tea. In fact, lowering my alcohol consumption has been the best decision I ever made. 3, or 4 months ago, I quit alcohol due to migraines. I don't even miss it, and thinking of a glass of wine just makes my head hurt thinking about it. Not to mention, recently I decided to have a glass to see if it would indeed give me a migraine. Sure enough, I got a headache right away and broke out in rashes covering my body, hot flashes and things that looked like hives. I think I may be allergic, or intolerant to alcohol.

What do you think of as a traditional yogi diet? What does your own diet consist of? Do you know of any misconceptions, or myths about the yogi diet?

To participate in the discussion, you must first become a member. It is quick, simple and free. The membership gives you access to all our communities.